I am always trying to improve my hang gliding skills.  Even though I have only bent two weak links in the last two years, I have never been satisfied with the way my glider lands.  In talking with numerous other Atos pilots, there was a common thread.  Some almost never had trouble landing their gliders and other had trouble most of the time.  I think I have come up with a reason and a solution.

It came to me when I looked at a picture of a friend, Bill Vogel landing his Atos VQ.  His hands were very high up on the down tubes. 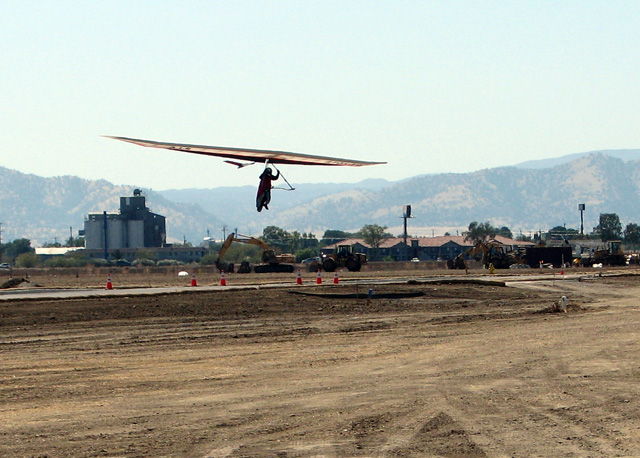 Bill always seems to have a good flare on landing.  The next time I flew I  paid special attention to where my hands were on the down tubes.  I saw that when I placed them as high as I normally did, they were just above the front wires.  This was all the higher my harness would let me grip the down tube.  I then “walked” each hand up the down tube until they were a least one hand width higher.  I found that I was actually pulling my self up.  You would think that this would cause the nose to drop, but it did not and the glider continued to fly normally.  When I flared, the glider rotated much quicker and the nose stayed up even after I stopped.  Normally the nose would start to drop after landing.

I have landed this way now three times and each time I was surprised how quickly and easily the glider flared.  I told this information to a pilot who has been having great difficulty with his landings over the past 3 years.  On his next landing he walked his hands up the down tubes one hand width higher and had his first great landing in 3 years, in no wind!